What is a Lightning Giving Game?

Offers of money are good for attracting attention, and interactive activities are good at getting people to engage. Lightning Giving Games can do both of these things. They are usually run at universities, Clubs Fairs or other tabling opportunities. They involve giving $1 (or a similar amount in local currency) to each participant to donate it to one of 2-4 charities.

Ben Kuhn from Harvard EA describes how he used a Giving Game to attract people to his club.

Approach 1: Three excellent charities with a range of cause areas

EA has a tremendous breadth of cause areas. This version highlights the fact and shows how difficult it can be to choose between different cause areas.

This document has posters for running a Lightning Giving Game with the Against Malaria Foundation, the Humane League, and the John Hopkins Centre for Health Security.

Approach 2: Two-step Giving Game, with one excellent charity and one appealing but ineffective or harmful charity

There can be a vast wide difference in effectiveness between charities. This version shows that we can’t trust our gut-feelings to give us an accurate indication of whether a charity is harmful or helpful.

A note on choosing charities

We recommend avoiding using Guide Dog charities or other particularly well-loved local charities in Giving Games. These charities’ interventions indeed tend to cost a lot of money for comparatively less benefit. However, pointing out their flaws can be offputting for people who have benefitted from the charity, either directly, or through family and friends.

How the game could work:

More information and FAQs for these two charities are here.

Choosing between charities is difficult. This version allows people to use data to inform their choices.

Giving Game materials - this is for a long giving game involving the Against Malaria Foundation, GiveDirectly and Schistosomiasis Control Initiative. You can trim the charity information to make it a Lightning Giving Game. 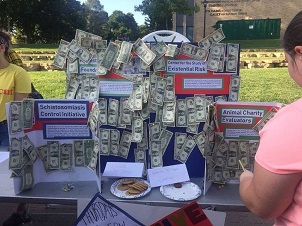 Key points you could bring up during or after your game:

You might like to present the results of your Giving Game during the first event after tabling.