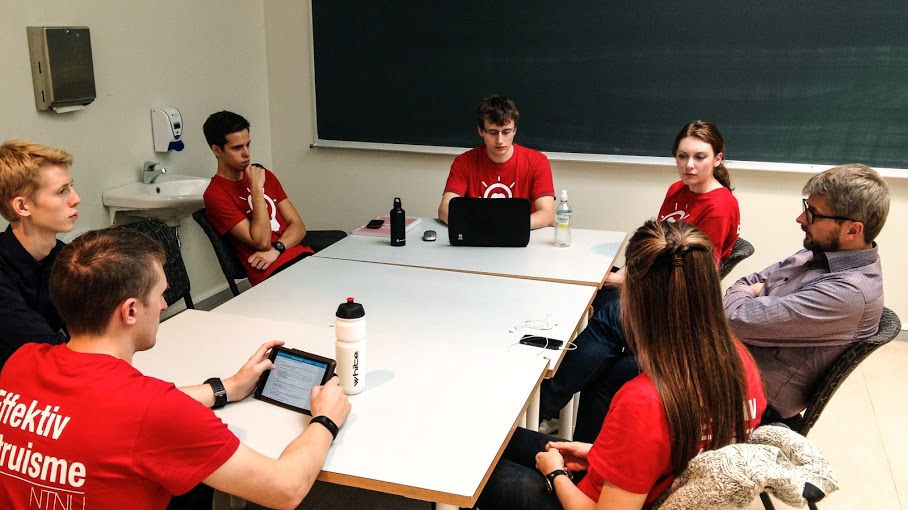 There are a number of different types of uni groups. To work out what type of group is suitable for your university, consider:

Possible goals your group could have include:

If there are quite a few people at your university who are already interested in EA, it might be better to focus on supporting these people. If effective altruism is relatively unknown, it might be more important to focus on outreach to new people.

Different groups have very different goals, but the most common goals of EA groups are assisting EAs to adopt effective career paths, recruiting new people to EA, and fostering a welcoming community (from the Local Group Survey 2019), as shown below. 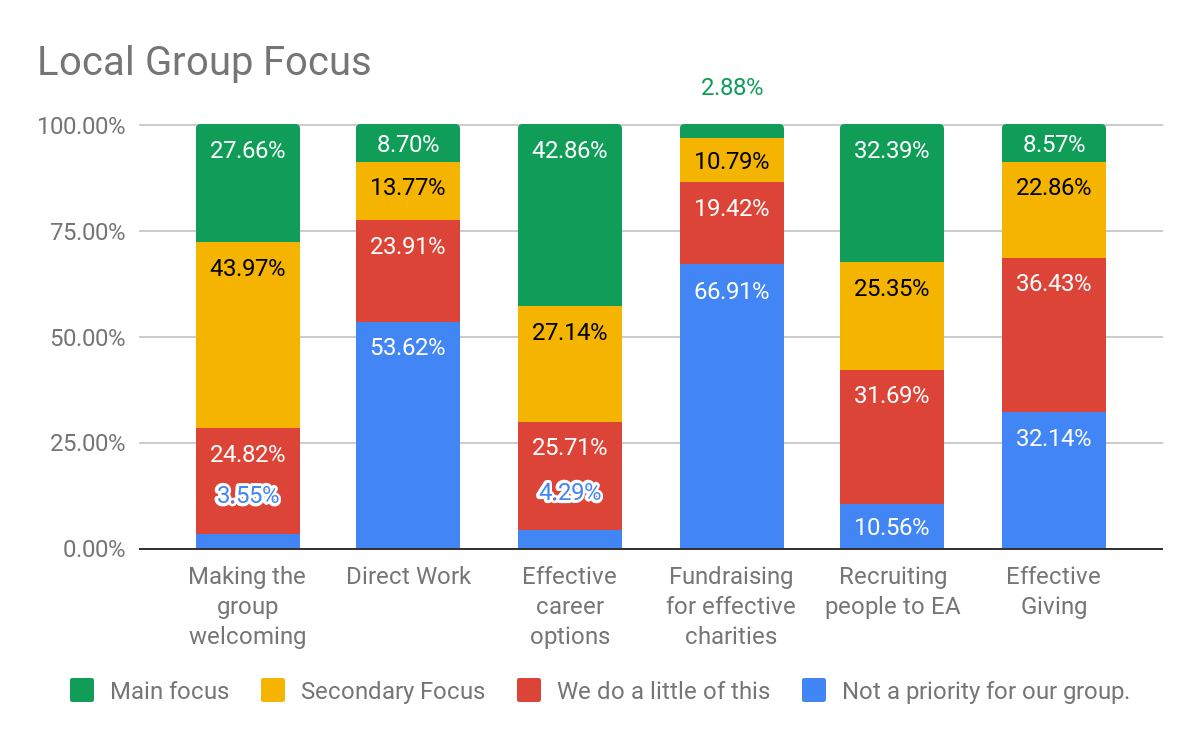 If you happen to gather members whose priorities substantially differ from yours, you may need to re-evaluate.

Being recognised as a student organisation gives you certain privileges, which may include:

Formal groups put on a variety of events, often including discussions, workshops, social events, and talks. They usually engage in outreach to people new to EA and help club members fulfil their effective altruism goals and gain more familiarity with the movement.

If you already know EAs at your university, you can meet up with them every now and then without worrying about outreach or complex programming. Members of casual groups hang out, discuss the movement, and support each other’s career plans. You may not even have to register as an official club with your university, though you should be careful not to violate any regulations. This is a good option if you’re very pressed for time, and it can turn into something more ambitious if your organising capacity increases later.

Multi-session courses run for a small group of admitted participants, usually advertised as fellowships, can be an excellent way to kickstart recruitment and quickly educate people who are new to EA. Some organisers begin their groups as only a fellowship and afterwards develop additional club activities with the help of the most committed fellows.

Fellowships may have more consistent attendance than regular clubs, but they require enough initial advertisement to reach enough applicants.

A fellowship might be a good way of starting a group if your group organisers:

Fellowships are usually advertised as prestigious and selective, and often require a high level of commitment from participants. Therefore, it is important that you only commit to running a fellowship if you are confident you can organise it reliably and meet participants’ expectations throughout its duration.

See also our guide to running an EA fellowship.

EA University of Houston successfully started their group with a fellowship.

Some groups hold events that are open to both students and EAs from the surrounding community.

Note that students and non-students often have different preferences for the style, location, and time of events, so a city-uni partnership needs to carefully balance these adequately. Particularly, some people may initially be reluctant to attend events at which they would be one of very few non-students.

In areas with distinct city and university groups, it is often healthy for the groups to host some events collaboratively even if they have separate leadership and do not usually have much overlap in attendees. These events can be especially helpful to students who are able to network with more experienced EAs. As well, they can increase the likelihood that students will attend the city group if they remain in the area after graduation or during a summer in which their university group is not meeting.

EA Wellington formed their group as a city-uni partnership.

EA Cambridge is based at the university, but tries to make most of their events accessible to non-students and also runs a lot of events specifically for non-students.

EA ANU used to act as a city-uni partnership but later chose to split the non-students off into a separate EA Canberra group.

Who Should Start a Group?

Starting a uni group is a good idea if you:

This isn’t to say you shouldn’t start a group if the above don’t all apply to you—you just might face more difficulties in getting the group off the ground. Some successful groups have been started by people in their senior year, and many groups start with just one organiser. In most cases, there’s no harm done if you try to start a group and it doesn’t take off, yet there could be a large impact if you succeed.

The time commitment for running a group depends on what you’re planning to do with it. Some groups just meet casually every now and then socially and for discussions, while others run extensive outreach campaigns, retreats, or large events. Remember that starting a group isn’t all-or-nothing: if you can’t currently run anything fancy, you can still introduce new people to the movement and support other EAs in your community in whatever ways you have time for. Along the way, you may find new members who want to help you plan more things!

At bare minimum, your group’s leadership needs the capacity to:

Before you start a club, make sure you and your fellow organisers can handle the workload involved on top of your classes, jobs, internships, and other activities. Remember that people usually underestimate how long it takes to do tasks (the planning fallacy)! This shouldn’t be a problem if there are several of you, you’re not trying anything overly ambitious, and you remain flexible. While some university clubs hold many large events, it is also very valuable to have a small uni group that simply acts as a place for interested people to discuss ideas.

If you’re founding a club by yourself, you may find yourself overwhelmed. Don’t feel bad if you decide you’re too busy to start a group or realise after doing so that you can’t manage the workload. You’re likely to go on to bigger, better, higher-impact things after you graduate. If you burn out now, you might be unable to take advantage of future opportunities.

After the club’s basic functions are taken care of, spare capacity can be used to:

If you’re having trouble managing the workload, delegate where you can and reach out for support. Notice where you are being unnecessarily meticulous and where you can drop some responsibilities. Focus on the club’s core activities by making your plans less ambitious and by letting go of less crucial programming.

Working with a co-organiser lets you share the tasks of starting and running a group, and also can be good for your motivation. If you don’t have co-organisers, you may still want to talk through your plans with friends or group organisers from other universities before implementing them, just to get another perspective.

You can find potential co-organisers by checking for existing EAs in your area, which might involve some of the following tasks.

If none of these options work out and you have the capacity, you could host a few smaller events yourself and get people with little or no prior knowledge of effective altruism involved.

To officially register a group with your university, you will probably need several people to be members of the group and to take positions on the committee. If you don’t have sufficient numbers you can ask friends to put their name down, just make sure you are upfront about what they will need to do, and what the procedure is for updating the committee member names when you do have more members.

It is a good idea to ask a friend or two to come to the first event with you for moral support and to make the group seem larger if few people show up. Remember that your group will introduce new people to EA, so you might wind up with interested co-organisers after you create it!

However, it is best not to ask people who are not particularly committed to effective altruism to become co-organisers or for help with important tasks because they’re more likely to flake, cut corners, make decisions that don’t align with your goals, and hurt the club’s reputation by appearing unenthusiastic, no matter how good their intentions may be. A prudent idea is to make a list of all the requirements you want your co-organiser(s) to have. This could include weekly time commitments, level of knowledge of EA, how often you want them to stay in communication with you, etc. It is sometimes better to complete tasks yourself than to delegate to people who aren’t going to do a quality job.

When you do have a group of organisers, it is worth investing time into ensuring the team works well together.

Once you’ve decided to run a group (with or without co-organisers), it is a good idea for your outward-facing communication to be confident—present as though your group already exists, rather than be too tentative. For instance, if you post on social media or send out emails saying “We are trying to start this new group”, people might not be excited to join; so, instead state what the group is about or what events are coming up.

Your Final Year of University

About 40% of groups believe that their group is more likely than not to stop running after the current organisers leave (2019 Local Group Survey). This indicates that recruiting new organisers is a common problem for groups.

Some groups take several years before they are firmly established. You should consider whether you’ll be around for long enough to guide your group to maturity and whether you have a competent successor who can take things over when you leave. It’s very common for groups to go defunct when skilled organisers graduate, so if you will be graduating soon, focus on recruiting younger students and pick out and train future organisers as early as you can. This could even be your most important task as a group organiser.

Learn more about preparing to hand over leadership.

BACK: Why Start a Group

If you have suggestions on how to improve this page, please comment or suggest edits on this google doc.